Why you will not see the CBSA on Nat Geo's Show 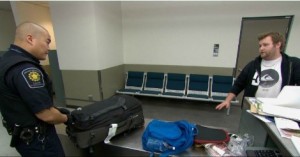 In a May 5, 2016, response to the Federal Privacy Commissioner’s recommendations, The Canada Border Security Agency (“CBSA”) ceased involvement in the program. On behalf of a construction worker who was filmed on a British Columbia construction site in March 2013, the British Columbia Civil Liberties Association filed a complaint with the Federal Privacy Commissioner (“OPC”) claiming violations of the Personal Information Protection Electronic Documents Act (“PIPEDA”) had taken place. In a nutshell, OPC determined the complaint was well founded and recommended CBSA withdraw from the program.

I for one love the show and gained some insight into the inner workings of the CBSA and our immigration policies. I found the officers were incredibly intuitive and surprisingly effective at what they do. The program will be sorely missed.
You can read the entire complaint on the OPC website. The root of the decision comes down to the fact that the Feds cannot have individuals waive their rights to privacy. At paragraph 123 of the decision, it reads:

“As a matter of principle, it is our view that federal government institutions cannot contract out of their obligations under the Act. Based on the Agreement between the CBSA and Force Four, the CBSA facilitates access to customs controlled areas for the purpose of permitting Force Four to film its enforcement operations. Given that the TV Program implicates the collection of personal information by the CBSA from individuals it detains in the context of its enforcement activities, it stands that the CBSA has a responsibility to ensure that it meets its obligations under the Act for any subsequent disclosure of this information.”

Alas, we are now stuck watching the American side of things which is not nearly as entertaining. I for one enjoyed watching the gun-toting Americans attempt enter Canada with weapons in their glove box and all the weird stuff international-travelers try to bring into the country. The show may be over but the reality continues, keep up the good work CBSA and protect us from weapons, criminals, narcotics and invasive species and so much more.